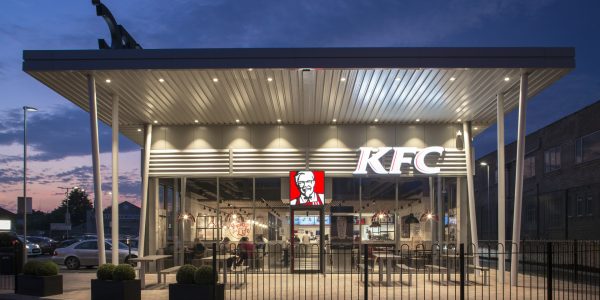 Halogen client KFC has created a new way to boost its considerable presence at the roadside.

At 800 sq ft, the latest drive-thru format is KFC’s most compact ever and almost half the size of its current smallest drive-thru.

KFC has 918 UK outlets, with more than 40 new restaurants set open this year alone. The ambition is for the brand to breach the thousand mark in the next three years, a target that Chris Holmes, chief development officer for KFC UK&I, believes is achievable. “In our market plan, we’ve got 550 vacant white spaces on the map. Of these 550, around 80 would count as a roadside opportunity, making it a pretty important chunk”, says Holmes.

The 800 sq ft small box will become KFC’s fifth drive-thru format joining the traditional 2,650 sq ft footprint, a larger format at 2,900 sq ft and two smaller ones of approximately 1,900 and 1,400 sq ft. Nick Hughes concludes: “the chances are it won’t be the last.”